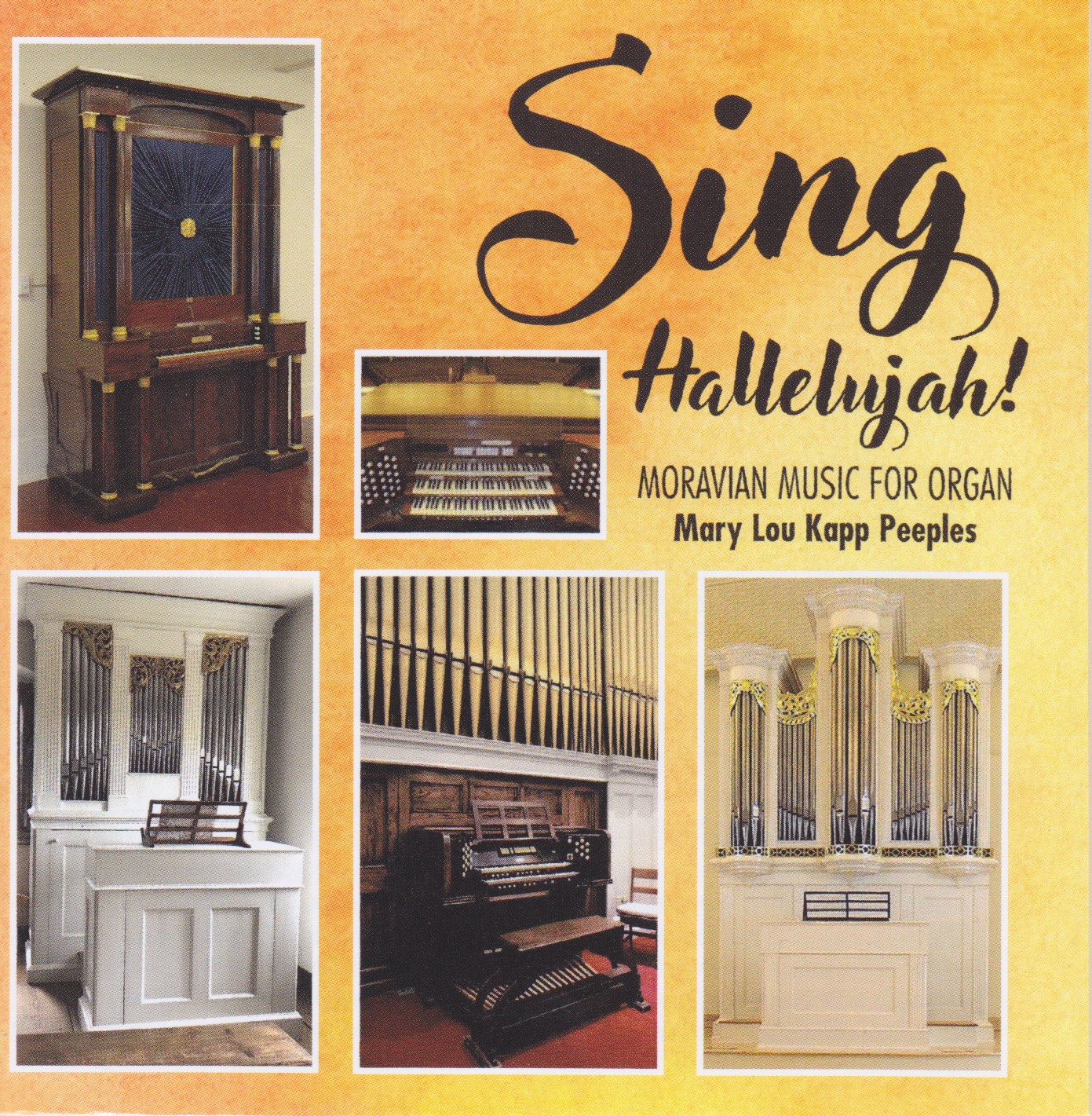 Since the 18th century on, the organ has played a vital role in Moravian music. Moravian organ-builder David Tannenberg crafted many instruments for Moravian and other churches in America. Those he built for the Moravians were at lower pitch and had far fewer solo stops than those built for other churches; within the Moravian tradition, the organ was part of the instrumental ensemble accompanying anthems, and also supported congregational singing; it was not seen as a solo instrument until the later 19th century. Thus most of the works on this recording date from the 20th and 21st centuries. The works by Christian Latrobe are among the few exceptions to this lack of Moravian organ music from the 18th or early 19th centuries, but these were most likely written for use in the Anglican Church.

While a number of composers are now writing solo works for the organ based on Moravian tunes, these retain the more modest characteristics of their Moravian ethos. Few are virtuosic, and all seek to communicate the character of the underlying chorale with the unspoken expectation that the hearers will, like their forebears, reflect upon the texts associated with these tunes.

The daughter of a Moravian minister, Mary Lou Kapp Peeples began organ study at age twelve and in the same year assumed her first post as a church organist. Well-known conductor Thor Johnson soon became aware of her extraordinary talent and asked her to accompany Moravian Music Festivals. She played for seven of these festivals from local to international level with Johnson and Ewald Nolte, and returned in 1984 as organ clinician for the international festival.

For over twenty years she and her husband Wade were professors of music at Judson College, where they received several awards for teaching excellence. They now live in Winston-Salem, where she serves as organist at Calvary Moravian Church and accompanist for the Moramus Chorale.

Brian Henkelmann (b. 1956) currently serves as Organist-Accompanist at First United Methodist Church in Jonesboro, Arkansas. He is active as a composer, piano teacher, and free-lance accompanist.

Nola Reed Knouse is Director of the Moravian Music Foundation, a position she has held since 1994. She served as music editor for the 1995 Moravian Book of Worship, and Moravian Chorales and Music, Volume 2, for band. She is author and editor of The Music of the Moravian Church in America.

Károly Demetrius Joseph Köpe (1926-2002) is a former Director of the Moravian Music Foundation.

Rebecca Kleintop Lepore has been the Director of Music and Organist of Central Moravian Church since September of 2002; formerly, Coral Ridge Presbyterian Church.

Stewart McElroy, a native of Wisconsin, has played piano and organ in a variety of Protestant churches over the past 30+ years.

Ryan Morrow has been the Director of Music and Organist of Schoeneck Moravian Church since September of 2011.

Wade Peeples studied composition with William Penn and Samuel Adler at the Eastman School, and his music includes works for organ and piano solo, choral anthems, art songs, and a variety of chamber music.

Erik Salzwedel is a trombonist with the Winston-Salem and Greensboro symphonies and is Business Manager for the Moravian Music Foundation.

Margaret Vardell Sandresky (b. 1921) is an organist, composer, and teacher. She has held teaching positions at the Oberlin Conservatory of Music, the University of Texas at Austin, the North Carolina School of the Arts, and at Salem College.

The Organs on This Recording

Winston-Salem has a rich pipe organ history going back to the arrival of the first little one-stop instrument in Bethabara in 1762 (possibly a Klemm), the locally built 1772/73 Bulitschek organs of Salem and Bethania, and the 1798 and 1800 Salem Tannenberg organs.